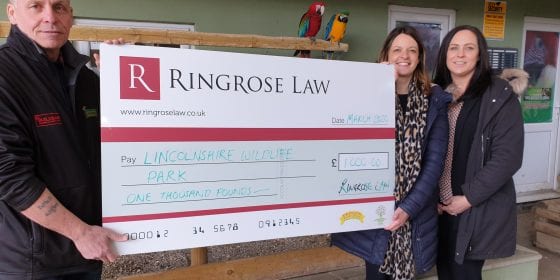 Congratulations to Lincolnshire Wildlife Park, the winners of the Ringrose Law ‘A Grand Idea’ for Boston.

The Lincolnshire Wildlife Park, incorporating The Parrot Zoo Trust in Friskney near Boston, is a registered charity set up to offer sanctuary & the most natural lifestyle to all species of captive bird and animal in need.

The charity houses the largest collection of Bengal Tigers in Europe. It is also the largest Parrot rescue centre in the world. They centre has recently re-homed two very rare White Lions, which are currently endangered in the wild.

Lincolnshire Wildlife Park entered A Grand Idea trying to raise money for a project they are raising money for.

“Nigel, our Puma, has a congenital eye disorder named Exotropia. This may render him completely blind in the next few years. Many other parks would have turned to euthanasia as his only option, however at just 7 years old, we would not do this. We desperately need to construct a sensory housing unit for him & settle him before his sight diminishes. This will have special medical facilities should he need further treatment, as well as sensory points to guide him around comfortably, for a long & happy life. The welfare of all our animals is paramount and we strive to re-home any animal, no matter what their complex needs.”

On receiving the news that they had won the competition CEO, Mr. Steven Nichols commented:

“Wow this is amazing news, a massive thank you to all at Ringrose Law and to our many incredible supporters, who again, have pushed us out in front. 100% of this money will go towards the ‘Help Nigel’ Appeal, to assist in the construction of our new enclosure for Nigel the Puma who has a debilitating eye disorder.”

The community project ‘A Grand Idea’, was first launched 2013 and relaunched in 2019. The project has supported over 25 local charities, groups and voluntary organisations across Lincolnshire and Newark.

“We had some fantastic entries from local community groups and charities in Boston and Spalding. After short listing the top four projects we opened up a public vote. We are delighted that Lincolnshire Wildlife Park has won our A Grand Idea for Boston. After visiting the Wildlife Park we couldn’t think of a better project to support.”

Ringrose Law has always supported the local community and given to charity;

“We are always keen to engage with the community whenever we can. We support a wide variety of sports teams, charities and local community projects across Lincolnshire and Newark.

At Ringrose Law we really want to make an impact in our community and leave a lasting legacy to benefit people for years to come. A Grand Idea offers every local project, however big or small, the chance to enter into this fantastic opportunity of winning £1,000.”

If any community project or charity would like to send an application in go to www.ringroselaw.co.uk/agrandidea for further information.